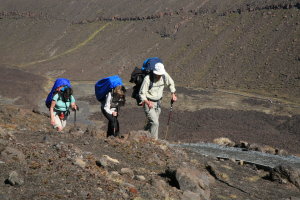 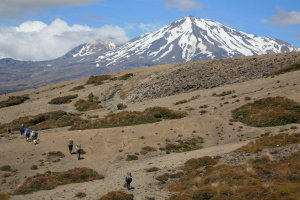 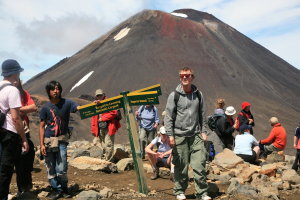 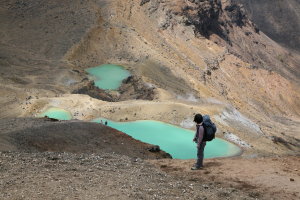 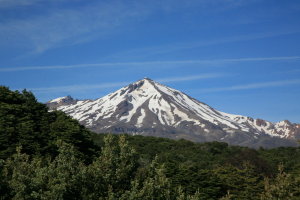 The Tongariro National Park has many claims to fame. For a start, it’s the location of one of New Zealand’s nine Great Walks. It is also one of the 890 World Heritage Sites. In fact, it’s a unique subset of the World Heritage List, being only one of 25 of the sites with a joint classification, for both Cultural and Natural Heritage.

And more recently, it’s become famous for playing dormant roles in the Lord of the Rings film trilogy as Mordor, Mount Doom and as Orc country.

My small claim to fame is simply that it was my third Great Walk in New Zealand!

I had completed the Lake Waikaremoana walk a week earlier and the Heaphy Track a couple of years earlier. I was on a trip organised by my tramping club, Melbourne Bushwalking Club, though there are options for commercial guided walks offering more comfort and style. Or of course, you can go it alone, with the right information from the Department of Conservation.

This tramp follows an anti-clockwise Circuit from Whakapapa Village, which is 1180 metres above sea level. It passes between Mt Tongariro and Mt Ngauruhoe, which are both optional side trips. Ruapehu is at the southern end of the Park, but it dominates the landscape for much of the walk.

I decided to begin the walk from Mangatepopo Hut, and not Whakapapa Village. Given the rain and reports of an eroded track, I’m glad I did.

Most of Day 1 of this Great Walk was shared with day walkers completing the Tongariro Alpine Crossing. They were in their hundreds that day because of a backlog of trampers caused by the previous days track closure. It began across relatively flat, barren ground with the occasional boardwalk and scenic detours to Springs and to the rim of Mount Ngauruhoe, a rim with a view, to quote a fellow tramper.

Had it not been for the hundreds of hikers that day, it would have been eerie and desolate, though colourful, in an unearthly kind of way.

Along the flats there were small streams of water full of potentially toxic minerals, an occasional snow patch and the backdrop of a snow-capped Mount Tongariro.

Later we climbed, eventually reaching the saddle between Mount Tongariro and the red crater. There seemed to be more chatter from the resting walkers than you’d hear on a shopping strip the day before Christmas.

The slide down the scoria and ash, from the top of the Red Crater, at 1886 metres above sea level, was the opportunity for adventure or fear, depending on your point of view. But from the top, the stark contrast between the bright mineral colours of the Blue Lake, the Emerald Lakes and the surrounding moonscape, was stunning and surreal.

Happily, the day walkers peeled off here to go to their transport pick up point, or for a night at Ketetaki Hut, so we strolled more quietly on the more gently undulating stretch to Oturere Hut.

Oturere Hut and campsite was a more grassy, hilly spot with pleasant views to a stream and a valley to one side, and to Mt Ngauruhoe and Mt Ruapehu on the other. Restful! For me, only a 12km walk but longer for those who took a walking detour to Mt Tongariro’s peak, 1,967 meters above sea level.

On Day 2 we walked to Waihohonu Hut, a mere 1,120 metres above sea level, with billion dollar views of Mt Ruapehu, a ranger who paid a beautiful tribute to the Maori people in the Maori language at night, and a refreshing stream near the campsite.

Not just a destination, this location proved to be a base for side trips. One side trip was to Old Waihohonu Hut, a former staging post for carriages, and now a museum piece to visit. There was another side trip to Ohinepango Springs, where a pool allowed a quick dip for any icebergers among us.

On Day 3, the 15km walk to Whakapapa Village offered great mountain backdrops, alpine vegetation, more streams, and towards the end, an elusive view of the Chateau Tongariro. It began to seem like a mirage to me as the path offered more and more twists and turns.

We did eventually arrive at the Chateau after an enjoyable walk through a beech forest and a refreshing diversion to Taranaki Falls, a short circuit walk in its own right.

The Chateau was a welcome luxury retreat for arriving, reviving and imbibing. And the place to celebrate the completion of my third Great Walk!

Whether tramping the Mount Tongariro Northern Circuit or not, a visit to Tongariro National Park will almost certainly be anybody’s cause for celebration.