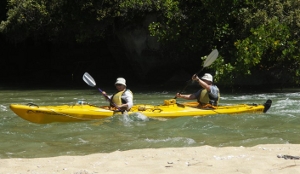 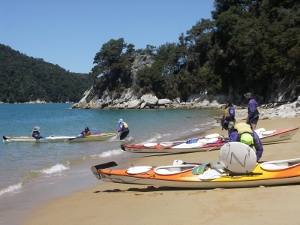 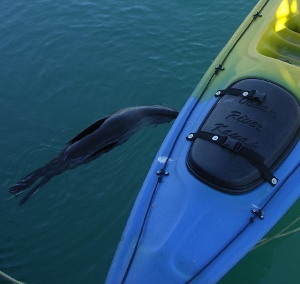 The Abel Tasman Coastal Track is one of New Zealand’s nine Great Walks. But my friends and I made Abel Tasman National Park a sea-kayaking destination, since we had just tramped another Great Walk, the Heaphy Track.

We were going on a freedom voyage, that is with no guides, so we spent a morning in sea-kayaking school with Abel Tasman Kayaks at Marahau. There was equipment instruction for kayak skirts, lifejackets, keels, kayaks, paddles, holds, and ropes. There was instruction on conservation and park rules, kayak evacuation and use of safety flares. And, on the practical side, launching and landing the boat, rafting up with other boats, stopping, reversing, steering. Quite a mindful!

We waved our instructor Banksie good-bye within a couple of hours, looking forward to seeing seals and other wild life, but it was mildly-wild waves that we sighted first. We passed Fisherman Island and Adele Island, before trying the landing routine at Akersten Bay.

Feeling a little smug after lunch, a re-launch and the sunny conditions, we headed off in excellent spirits, not expecting too much trouble despite the ominous names of “The Mad Mile” and “Foul Point” on our laminated maps. But indeed, we had to battle choppy waves as we headed around Te Karetu Point, Adolphe Point, Hapuka Reef and Te Pukatea Bay, trying to get the angle of the sea-kayak just right against the incoming waves, so we wouldn’t tip.

The double-kayaks are more stable for novices so yes, we did make it safely to our overnight destination at Anchorage Bay, though even there we faced an offshore wind and made slow progress towards the shore.

But this little bay was a retreat, and our overnight stay in the Aquapackers Houseboat seemed like the lap of luxury. An occasional seal visited us in the water below as we barbequed on the deck and massaged shoulders.

I nicknamed the most persistent visitor Abel, in honour of the park and Tasman Bay in close vicinity. Abel was meant to be the first of many seals we would discover on our two sea-kayaking trip as we were headed up towards Tonga Island and its associated marine reserve.

On a more leisurely second day, we stopped regularly on secluded beaches and in the late morning, watched the tide sweep in and over sandy beach banks and into lagoons, creeks and estuaries, first at Bark Bay and then by the tranquil waters of the Falls River at Sandfly Bay. Depending on the tide, we ported our kayaks over sandbanks or paddled them through swiftly flowing water.

In between beaches and estuaries, we successfully manoeuvred between rocky outcrops, seeing shags on rocks who stared back, and cormorants, gulls, oyster-catchers and gannets.

We headed off towards Tonga Island for our visit to the seal colony. The waters around “Foul Point” were somewhat true to its name and with waves battling offshore winds. Tt was all too hard so we reluctantly headed into Onetahuti Beach at Awaroa Bay for our water taxi pickup and the end of our two day experience.

We bounced back in a little flotilla of water-taxis, some carrying kayaks across their gunnels and looking like neat sets of butterfly wings. Mid-flight, water-taxi driver Marcus, took us on a detour to Tonga Island to see the seal colony we’d missed earlier.

In the Abel Tasman National Park the tide differences are wide and a five or six hundred metre beach had appeared by the time we returned to Marahau so that tractors had to haul the kayaks back to shore.

It’s a paddle on the way to completing another of New Zealand’s Great Walks, but I will have to go back and tramp it, to add to my claims of Lake Waikaremoana, Tongrariro Northern Circuit and the Heaphy Track. Whether you want a day walk or a Great Walk, a sea-kayaking adventure or a peaceful overnight stay in houseboat on an isolated bay, Abel Tasman National Park is the place to start. It’s not far from Nelson on the north of the South Island.

My heart is still with Abel, the flirtatious little seal at the Aquapackers. Well I assume it was a male. If you’re there and you find that he’s not, perhaps you could rename him. “Mabel” perhaps?