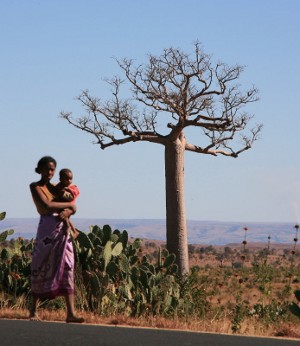 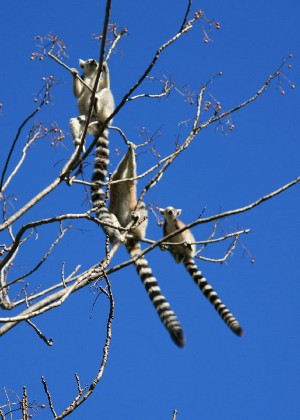 Before I visited Madagascar (“Mada”) I knew it was no ordinary island.

I knew it was the fourth largest island in the world (if island continents are excluded) and that it had separated from the African continent some 85 million years ago.

Because of its isolation, Madagascar preserved the only habitat in the world in which lemurs have survived and in which numerous other species continue to thrive.

I knew too, that humans had deforested the country and caused numerous species of lemur to become extinct.

So what would I find?! Happily in my encounters in Madagascar with both the natural history and the human activity, I discovered a lot to be positive about.

Fortunately, Madagascar is not entirely denuded of trees and in many parts, the habitats of lemurs and other animals and plants are being restored. Just as well, as this is a highly bio-diverse country, home to at least 51 species of lemur among other mammals, 6000 plant species, 300 reptile species, and 200 breeding species of birds (including five endemic species). There are still tracts of rainforest and unique Baobab trees stand tall in various parts of the country

While the lemurs are endangered, you can still encounter these primordial creatures in numerous beautiful enclaves in Madagascar. In all, I saw fifteen species of lemur in Madagascar and I want to go back for more.

On various jaunts, my guides kept spotting chameleons. Although social (and aggressive) communication, rather than camouflage is thought to be the reason why chameleons change colour, without the guides my numerous chameleon encounters would not have happened.

My guides would see chameleons on the ground, on the side of the road, on an electricity wire or in a forest. They’d keep the aggressive ones at a distance on a stick held well in front of them.

There is something magical about a creature that can change its colours. It comes from a chameleon’s uncanny skin structure. Under a transparent outer layer of skin it has several layers of specialised cells containing different pigments. These selectively reflect and absorb light, changing under different endogenous and exogenous conditions.

It’s as though these reptiles have read the book Understanding Color!

Zebu are a hump-backed cattle breed. Although they are not unique to the island, I began to see them as one of the symbols of Madagascar.

I first saw Zebu en route to Lemur’s Park where a Zebu market was operating. This was the beginning of many encounters with Zebu, in the food I ate, as herds that became obstacles on the road, as beasts of burden and as a means of transport. Zebu are a traded commodity and a status symbol when you own many. They are also a means of exchange in marriage negotiations and are sometimes sacrificed.

And the Zebu markets seem to provide a social occasion, a place of colour and fun, almost a festival occasion. They are a place to dress up, to relax, to communicate, and to transact items, not just zebu.

In many ways my preparation for Madagascar was good but, in many other ways, it was totally inadequate. But visiting a unique country like Madagascar is not something you can readily prepare for.

Every encounter in Madagascar is an adventure! 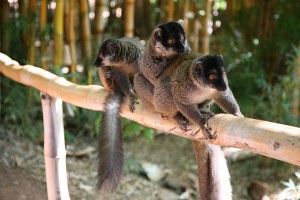