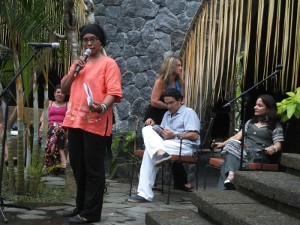 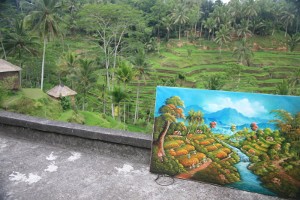 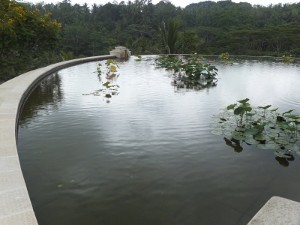 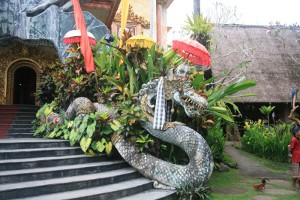 Writers Festivals as a Travel Experience

On the surface I don’t have much in common with DBC Pierre, 2003 Man Booker Prize winner for Vernon God Little. He’s a self-professing rebel, whereas I’m a bit of a goody two-shoes.

What we do have in common is that we both attended the 2011 Ubud Writers and Readers Festival in Bali, Indonesia. Of course, there was a big difference in the fact that he was an important guest and I was a volunteer, exchanging four four-hour shifts for a free pass to the main events.

The 2011 Ubud Writers and Readers Festival offered a cultural smorgasbord, or Rijsttafel, as a banquet is called in Indonesia. It was a whimsical fusion of colours, flavours and styles from Indonesia, Australia, and all the continents on the globe.

Most participants had travelled especially to attend, so Ubud and the Writers and Readers Festival are almost inseparable. You live and breathe both Ubud and the festival for five days and become part of a community. And so it was relatively easy to chat with writers.

I first met DBC Pierre when I sat down one evening for a buffet style Rijsttafel. As we went around the table introducing ourselves, one charismatic man introduced himself as Pierre. I realised that I was meeting a Booker Prize Winner for the first time in my life. Fan clubs can start like this!

Professional writers were a-plenty. There was Janice Y.K.Lee, author of The Piano Teacher, Alexander McCall Smith of Number 1 Ladies Detective Agency fame; German engineer-cum-author who recollects his times in Indonesia in The Magic Gecko; and new Indian-American writer Aneesha Capur, whose first novel Stealing Karma is making an impressive debut.

The venues, set against the backdrop of the hills, palm trees and rice paddies in the midst of the renowned artist zone of Campuhan, added to the ambience of mainstream, cultural and special events.

At the Four Seasons Hotel, a lotus pool re-defines the meaning of horizon pool as it merges into the palm-treed Ayung valley. There DBC Pierre discussed his writing with dozens of eager readers, and signed my copy of Lights Out In Wonderland.

Paul Kelly enthralled crowds as he performed with Lucky Oceans and musicians from Indonesia. Of course, he also discussed his book, How to Make Gravy. There was a street party in the Jalan Gotama laneway and the closing party was a musical feast in the exotic grounds of the art museum of the late Antonio Blanco, an artist who called himself the Dali of Bali. Each evening you could kick up your heels at the Festival Club at Casa Luna restaurant. Between sessions you could be entertained by Balinese gamelan music.

Around Ubud I found myself engaged in the meditative process of twisting and weaving coconut leaf, betel nut leaf, flowers and incense into chakra-shaped baskets pinned together with bamboo. This was a session where Balinese women explained the language of the Hindu religious offerings. Around Ubud and most of Bali, you will find the offerings on the pavement, at the corner, at the temples or being carried in woven baskets on the ubiquitous motor bike. I offered mine at the inevitable shrine at my hotel – because you start to believe in it when you’re there.

The Ubud Writers and Readers Festival is in a great location, a beautiful place in the hills, green, lush and cultured and only a couple of hours drive from Denpasar, Bali’s capital. But it’s important not to be too distracted by the scenery as you walk along! You’ll find you need to watch your step, weave around gaps in the footpaths or negotiate uneven steps without handrails.

The Ubud Writers and Readers Festival cleverly merges into the surrounding community with its books, food, art, music, ambience and venues. DBC Pierre said that he detected the vibe and spirit of the festival when he was invited to attend the Festival by its Founder and Director, Janet de Neefe, and he simply couldn’t resist.

At one of my volunteer stints, I was accompanying DBC Pierre down the stairs to meet the event organiser, when I chanced to comment to him on my aversion to the stairways of Ubud. He offered me his arm. Yes, I was chuffed at walking down the considerable staircase on the arm of a Booker Prize winner.

Part of the fun was definitely about meeting writers, not just famous ones, but also the not-yet-famous. But it’s also a complete cultural and travel experience, not limited to books and writing.

So I’ve joined the fan club. Yes, I’m now a DBC Pierre fan, but I’m definitely a fan of the Ubud Writers and Readers Festival. I am looking to ways of combining travel and writing in Ubud in October 2012.