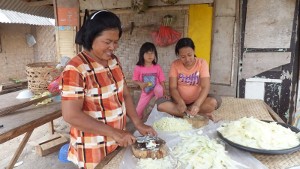 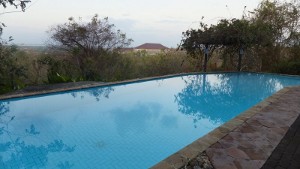 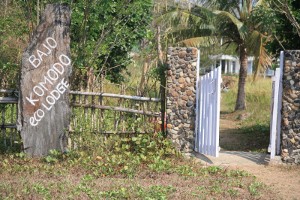 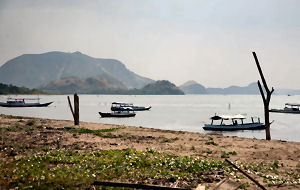 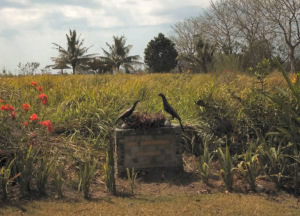 In Indonesia, especially in Bali, you can travel in luxury. But you don’t have to – you can go green.

In Nusa Dua, Bali, the artificially green manicured lawns of the luxury resort-enclave look beautiful. The up-market hotels with their open plans, horizon pools, flowers and wicker furniture satisfy the style and design needs of aspirational visitors, who are often from Australia.

But a scraggly, dry wooded area near the Udayana University between Jimbaran Bay and Nusa Dua, arguably serves a more important need. This environment provides the right vegetation for larvae, pupae and butterflies for at least 80 species, and allows 50 species of birds to flourish and fly. And there are five species of land snails and the occasional squirrel.

This wooded area is part of the grounds of Udayana Kingfisher Eco Lodge , only 15 minutes from the Denpasar airport in Bali, Indonesia. It’s a place to stay in a simpler way. It’s in the style of a traditional guest house, encouraging you out of your room, into the gardens, the wooded area, the pool, open dining area and central lounge and library.

An extraordinary couple, Alan and Meryl Wilson, recognised the tourism potential of the Nusa Dua Hills over fifteen years ago. Despite the fact that the site’s trees had been stunted by villagers’ use of new shoots to feed their cattle, this location had outstanding views of Mt Agung and Benoa Bay. With vision and a change of land management practice, the vegetation has rebounded.

Leasing land from the university in 1993, Meryl set about designing and operationalising the lodge, and it was opened in 1995. Then Meryl set out to research and record the butterflies on the site’s 10 hectares, eventually leading to her publishing an informative and beautifully illustrated book about butterflies in general, and the Butterflies of Lowland Indonesia in particular.

The Wilsons paid close attention to the suggestions, realising that they came from people who really cared about the environment and the preservation of endangered wildlife. They invited them to also take a stake in the financial operation of individual lodges.

That has meant that in Indonesia, you can now travel between five related Eco lodges that follow ecotourism principles and support endangered species or maintain habitat for other species. There’s the Komodo Eco Lodge in Flores. From there I took a boat journey to Komodo and Rinca Islands, allowing me to see about 20 of the world’s 2500 remaining Komodo dragons. The lodge at Flores also provides a conservation area for coucal, a type of cuckoo, which likes to graze in alung-alung grass, also used for thatching. Flores has another Eco Lodge, Kilimutu, in close proximity to crater lakes.

In the Satwa Elephant Eco lodge in Sumatra you are relatively close to the Way Kambas National Park, which provides the native habitat to protect Sumatran elephants, tigers and rhinos. In Kalimantan, travelling by boat through the rainforest between the Rimba Eco lodge and the Tanjung Puting National Park you will be sharing the environment of orang utangs, gibbons, monkeys, butterflies and birds.

The Wilsons and their Indonesian staff have ideas for more Eco lodges and are interested in attracting more interested shareholders to allow them to develop their concept further.

I felt I had everything I needed at the Eco lodges and was glad I had discovered Udayana Eco lodge in my Frommer’s Guide to Bali and Lombok. I liked the Eco credentials of the lodges, found they offered a friendlier environment than a luxury resort, and set me less apart from the local community. So just as the cows and chooks from the local village sometimes strayed into the Udayana grounds, I was able to wander into the village, meeting local women at work grating papaya or startled cows viewing me suspiciously.

Like many before me I was still enticed by some luxury experiences – spas, pools, shops, resorts and seafood restaurants on the beach. I took taxis there through the congested traffic and pollution. But from Udayana I went to Romansa, a local spa rather than a tourist spa. I swam in a pool filled from bore water. My towels were changed every two days, not every day or at my whim.

No doubt I still left a carbon footprint, but I do think I minimised it. I’ll go green again in Indonesia.