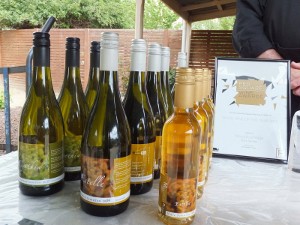 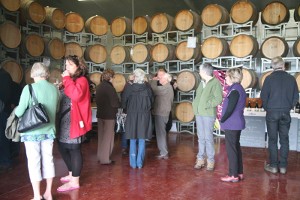 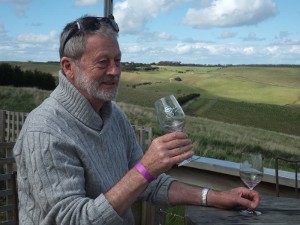 The tenth annual Toast to the Coast Festival was held on the Melbourne Cup “Long Weekend”. So on the last weekend in October, 2011, I decided to share in the celebration of the wines of three sub-regions of the Geelong Wine Region, namely the Moorabool Valley, The Bellarine and Surfcoast/Otways. Between them these sub-regions have 780 hectares (1,950 acres) under vine, 50% of it is in the Moorabool Valley, 30% in The Bellarine and 20% in the Surfcoast/Otways region.

The Geelong Wine Region is part of the Port Phillip Wine Zone in the State of Victoria. It’s a cool climate wine region with a similar terroir to the famous French wine regions of Bordeaux and Burgundy. Not surprisingly, it’s also a region of an increasing number of accolades, awards and beautiful vintages. Chardonnay is the signature white wine of the region, while Pinot Noir and Shiraz are the signature red wines. But there are number of other grapes grown, including Sauvignon Blanc, Pinot Gris, Riesling and Cabernet Sauvignon and more.

While my friend John played the exceptionally important role of driving the car, I juggled my maps, i-pad and several books in the passenger seat.

It was difficult to make a decision on which cellar doors to visit, since between them the three sub-regions boast 150 vineyards, 60 wineries and 40 cellar doors. For Toast to the Coast, there were 13 cellar doors open, with an additional 14 wineries represented across these venues. All wineries were members of the Geelong Winegrowers Association. Being much more familiar with The Bellarine Peninsula and Geelong, this time we decided to start with the area we knew least, the Moorabool Valley. Visiting five wineries took all of Saturday!

Before we visited each winery I consulted Produce to Platter, Geelong and Surrounding Regions since it backgrounded each one so well. It was always a family story because, without exception, the wineries in the Geelong Wine region are family owned enterprises. For information about viticulture, viniculture and individual grape varieties, I was frequently consulting another book, Beverage Basics.

The Moorabool Valley was green, lush and steeply undulating with its light and dark chocolate volcanic soils and outcrops. I started my Pinot Noir tastings at Austin’s Wines, where Darriwill Farm was also represented, before proceeding to Moorabool Ridge, del Rios of Mount Anakie Winery, Clyde Park Vineyard & Bistro and then Lethbridge Wines. All these wineries presented us with food choices too, whether in a permanent café/restaurant or in temporary quarters. And inevitably we had beautiful views since Moorabool Valley has the highest altitude of the three sub-regions.

On Sunday we decided to visit the two Surfcoast/Otways wineries that were featured, but found the vibe so much fun at Brown Magpie Wines that we spent a couple of hours there. It flew by as we sampled whites and reds, as I indulged my passion for buying magnums of red wine, we tasted wood fired pizzas, listened to the music, smelled the sentinel roses at the end of each line of vines, and chatted to the amiable proprietors and friends about the passion, business management, wine-growing and wine-making skills of their viticulturists and vignerons. I came away with my magnum of shiraz and pinot and another dozen of the 2005 Pinot Noir. Happy drinking it will be.

Yes, we did make it to Bellbrae Estate in the Surfcoast/Otways, where another four vineyards were also represented. I’m sure the wines were excellent. But we decided to focus our day on experiences within individual wineries, rather than on sampling all the wine we possibly could. Besides, my friend John was designated driver and could only imbibe the tiniest of sips.

We went on to Leura Park Estate in the Bellarine sub-region, much closer to the sea, where we enjoyed the humming atmosphere of the place, with seven featured wineries. The music was boppy and loud, the Pinot Noirs exceptional and there was a breath-testing station to ensure that we were both fit to drive. The Curlewis Pinot Noir was exciting and indeed this winery and this wine have been very highly rated by Australian wine expert, James Halliday.

It was cloudy and wet as we drove from vineyard to vineyard, but we had a great time, tasting, learning, relaxing and becoming more acquainted with the nomenclature of state, zone, region and sub-region. This naming system has official status under the Australian Wine and Brandy Corporation’s classification system, otherwise known as Geographic Indications (GIs).

The Toast to the Coast will linger with me at least as long as I have my bottles of Chardonnay, Pinot Noir and Shiraz . My ambition is to use the extensive vocabulary I’ve found in Beverage Basics to describe each individual wine I try. Meanwhile, I’ll think of the Geelong Wine Region as a place to find fine examples of three signature wines and a number of emerging contemporary wines.