An article in the New York Times inspired me to go to Bahia Bustamante, a remote coastal location in the east of Argentina on the arid plains of the Patagonian Steppe.

With the exception of a few independent travellers from Germany, the same New York Times article had also motivated most other guests. Reading Trip Advisor confirmed how influential the NY Times article had been, while the comments from visitors made me aware that some visitors had un-met expectations.

Yes, the review raised high expectations in me too, and never for a moment do I regret my decision to go there. What I think the original article may have done is given the impression of wild-life at your feet and possibly an impression of luxury, since it is by definition an “exclusive” destination.

Whether you arrive by road or by zodiac from the National Geographic Patagonia cruise boat, it is an exclusive destination. Only a privileged few can afford a National Geographic cruise. And if you come by road and stay, you are again one of a privileged few, since Bahia Bustamante hosts only eighteen guests at a time and only four hundred a year.

But an exclusive destination is not necessarily a luxury destination.

For me, part of the additional cost was because I was a single traveller with relatively higher travel and accommodation costs. But part of the premium I paid was for a unique experience. You pay a premium for natural wonders, expert guides, pristine beauty, slices of Argentina’s past and present, authenticity, remoteness and the opportunity to support an exemplary conservation effort.

Visit Bahia Bustamante at the right end of your trip

I visited Bahia Bustamante at the end of my four week visit to Argentina, after I’d experienced bustling Buenos Aires, been haunted by the ghost of Eva Perón, seen the magnificence of the Iguazu Falls, experienced Gaucho as well as immigrant cultures in Bariloche, and from El Chalten had seen the stunning Andean mountain range (formed from geological upheaval 65 million years ago).

My visit to Bahia Bustamante capped it all off, letting me knit together all the strands I had discovered in Argentina. There were connections with Juan Perón and Argentina’s economic history, with the geological upheaval which formed the Andes and with the culture of Gauchos and native Indians. There were visible links to the unique geology and geography of Argentina.

I stayed in a simple concrete ‘steppe house’, painted sky blue and white, the colours of Argentina’s flag, and in keeping with the colour palette of the natural environment. My package included accommodation, three intriguing meals and at least two daily excursions, helping me ‘unearth’ Argentina. The daily excursions were unforgettable. 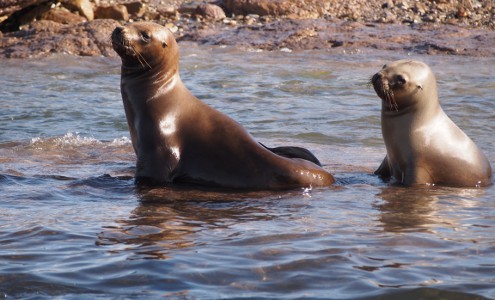 My favourite excursion was the boat trip to the small archipelago of Calita Malaspina Vernacci, part of a marine park designated in 2009 as Parque Nacional Patagonia Austral.

Here, diverse wildlife sits at a pinnacle of a complex food chain, feeding on the crustaceans, sardines, anchovies and other marine animals, which in turn feed on the abundant phytoplankton, microalgae sea forests, and benthic communities, way below the surface.

Owner and excursion leader, Matias Soriano, would cut the engine so we could drift closer to the shoreline for opportunities to watch nature at play.

We might see a male sea lion flapping furiously towards an upstart young male getting too close to his harem, dispersing all in its path. Or a predatory falcon, a caracara, waiting for an injured penguin to die on the shell-gritty beach.

Meanwhile, Magellanic penguins would nest, swim and waddle up the beach. Or pairs of flightless steamer ducks would paddle past or steam along by propelling their way through the water by flapping their wings.

The origins of Bahia Bustamante, the village

In the 1950’s, the grandfather of the current owner, Matias, was forced to find a substitute for an emulsifier which he used for his hair gel manufacturing operation in Buenos Aires, when President Juan Perón, husband of the controversial Eva Perón, slapped tariffs on imports to try to save the economy.

Learning that a substitute was agar agar from seaweed, Lorenzo Soriano headed down to the bay of Bahia Bustamante, then infamous for the smell of rotting seaweed, bountiful along with other flora and fauna of the area. Another entrepreneur, Lopez, was operating a solitary inn for “journeymen”. Lorenzo stayed at the inn, launched a new venture as a seaweed harvester and processor, gradually building a town around Lopez’ bar. In its heyday, the 1970s and 1980s, the town had a population of 500.

The cultural history of the area

On another excursion, guide Santiago, showed us significant vestiges of the former inhabitants, the Tehuelche Indians, who were virtually eliminated by the Spanish invasion several hundreds of years ago. Concheros, piles of discarded mollusc shells, still exist in protected pockets of the sand dunes along with an array of knives and other tools, made by chiselling petrified wood with granitic rock.

Los Chenques, an ancient burial site for Tehuelche elders, also remained, each former grave marked by an identifiable cluster of scattered rocks. Santiago explained that they were “once in the shape of a whale” since the Tehuelche believed they would carry the elders to their after-life. But the Spanish desert campaign had “left no stone unturned’ in its quest for silver and gold, desecrating the burial site. And that’s the origin of the term “left no stone unturned”.

The Spanish conquest also had another side-effect. When horses and cattle escaped or were stolen from the Spanish in the 1500s, natural selection led to a robust breed of criollo horses, well adapted to the Patagonian Steppe.

One day I rode a criollo along the beach, gaucho-style, holding both reins in one hand. 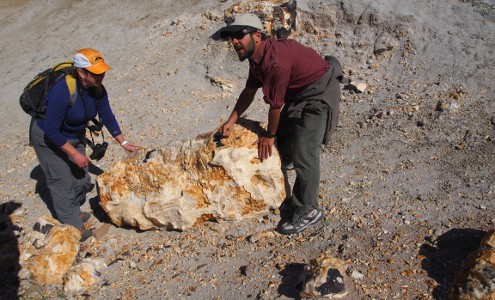 On another occasion, guide Adrian took us to a sandy, eroded part of the property to see the petrified forest of El Bosque Petrificado “La Pirámide”. Petrified tree trunks were peeping from the sand dunes, or were smattered and scattered in astonishing colors and shapes across the dunes and steppe. “65 million years ago, this was a forest” Adrian said. At the same time that the Andes were formed from volcanic activity, volcanic ash buried the forest. Then mineral-soaked water seeped in and fossilised the trees.

Suspicious guanacos, unsociable and untameable relatives of the llama family, looked on, guarded by their leader, the relincho, who always left the scene only after the others were safely away.

The ranch and the rise of the tourist venture 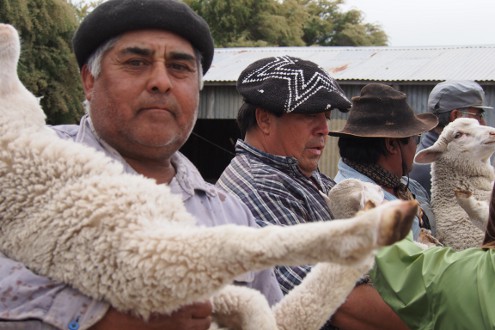 In time, Lorenzo the founder, had started to collect property rather than seaweed, using his entrepreneurial talent to buy good sheep country, including a property with spring-fed water. This water still supplies the village and adjoining ranches. One excursion lets you work with the Gauchos and share their national drink of bitter tea, yerba mate …

The sheep farming continued, but the seaweed industry limped along as over-harvesting, oil spills and introduced seaweed started to affect the yield.

Several decades later, Lorenzo’s grandson Matias Soriano, demonstrated an entrepreneurial “chip off the old block”, by turning the emerging ghost town on its head and into a Patagonian experience for travellers. He’s also become a conservationist, part of the farming conservation group, Ovis XXI, collaborating to stop erosion and bring six million hectares of Patagonian Grasslands under regenerative and sustainable practices. The original housing from the seaweed village has been re-purposed as guest quarters. Appropriately, Bahia Bustamante is a founding member of Conservation Lodges. 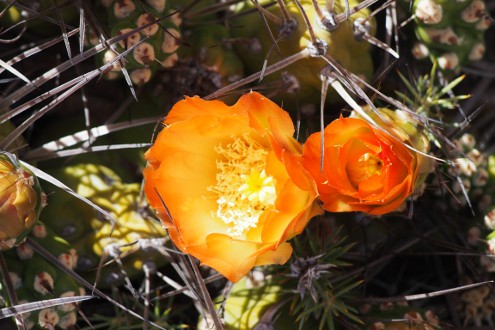 Draw your own conclusions

Discover Bahia Bustamante on the arid Patagonian Steppe after you’ve visited the tourist spots and had your luxuries. Use the experience to get in touch with Argentina and to connect the dots of your other experiences. See Argentina from the inside, not the outside.

Flights: Aerolineas Argentinas flies from Buenos Aires and other airports to Trelew.

By road from Trelew:

(i) Don Otto bus lines Almost three hours to Garyalde and then one more hour with Bahia Bustamante guide, or 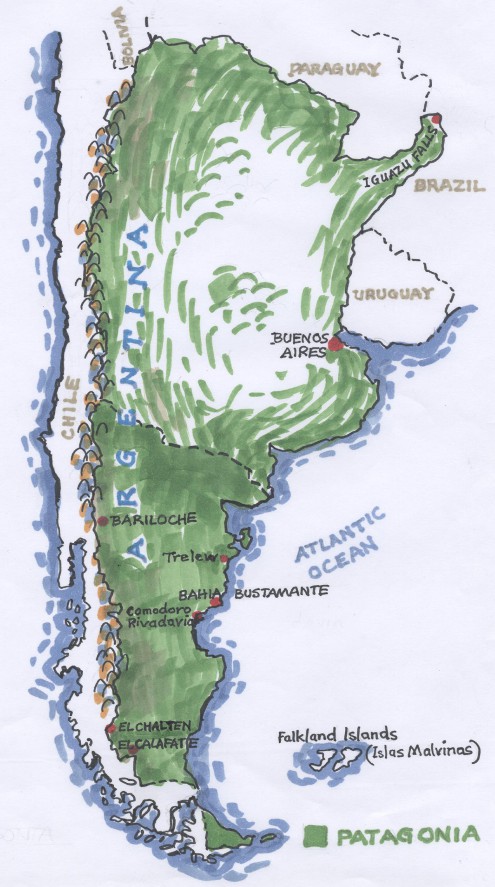