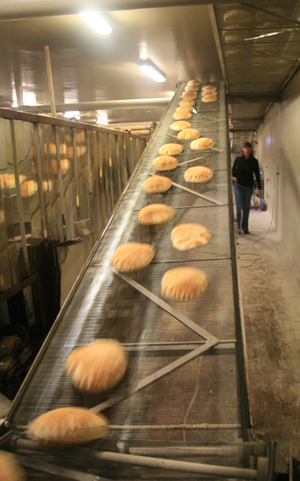 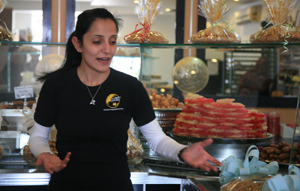 For a taste of Lebanon, you need go no further than the Western Suburbs of Sydney!

I went on a guided gourmet tour called ‘Exotic Flavours of Lebanon’, with Gourmet Safaris to Punchbowl, Lakemba, Canterbury and Greenacre.

This is one of a number of food tours designed by TV food presenter and author, Maeve O’Meara.

The tour combined visits to retail outlets and restaurants, a visit to a Lebanese bread manufacturer and expert commentary, on this occasion, from Sharon Salloum. She is the chef at her own bar/restaurant in Sydney’s Darlinghurst, called the Almond Bar.

My “hot” favourite of the tour was the Baalbek Bakery. In a mere ten seconds, an open oven set to  900 degrees Celsius, popped small spheres of d
ough into larger, beautifully ballooned orange-pink spheres, creating a natural “seam” between the two halves.

Despite their short bake-time, the loaves kept radiating heat as they proceeded in two queues along several layers of conveyor belt, until they’d cooled, lost most of their steam, and the balloon had become a flat pocket bread for beautiful fillings.

It was a good starting point to the tour, because as proprietor Dominique explained, the Lebanese bread is “the food that binds the cuisine”. This was proven later as we used it to sample dips and cheeses, had it as a salad ingredient in fatoush and used it as a cutlery alternative over lunch.

We proceeded to a nut roasting business and delicatessen, a Halal butcher, a Lebanese pizza shop and a supermarket that I’m sure could have been transplanted from Beirut.

At the delicatessen we were introduced to a range of Lebanese dairy products from Grandpa’s Dairy, including fetta cheese, labna (a yoghurt cheese) and shanklish cheese balls. We tasted the freshest and best dry roasted nuts I’ve ever had, as well as kri kri peanuts, olives, tahini and halva.

The freshness of the food was easily explained. Lebanese customers buy in bulk and turnover through the retail outlets is rapid.

The final stop was, of course, a sweet and coffee shop.  The shelves were depleted from recent eid celebrations for the end of the Islamic Ramadan period, but still well stacked.  Honeyed, pistachio’d and baked pastries were piled high.  There were shortbreads, nougats, date and walnut slices, sugar coated almonds and chocolates.

Desserts had evocative names like “The Rose of Damascus” or “Lady Fingers”, and the shop was made all the brighter with colour-themed presentation packs of sweets and cakes in baby blue or pink, orange, chartreuse and numerous other colours.

These sweets and cakes seemed to demonstrate that the Lebanese culture is a celebratory one. But a newly-released book The Sweets of Araby takes the coveted nature of sweets in the Middle Eastern culture to a new, more sensual level. The book depicts some of the tales from the Arabian Nights, complete with reference to desserts and sweets, and also presents the recipes for them. In one fine tale, a beautiful sultry eyed woman is turned down by a besotted suitor in favour of a sweet called luqum.

Unpretentious is the word I would use to describe most of the establishments we visited in this tour, with the butcher being the smartest and most modern with its appetizing displays of lamb, chicken and beef products.

The baker, Dominique, suggested that Lebanese bread was just right for a “post-modern sausage sizzle”. The butcher, Mohamed, suggested lamb kofta on skewers for the Aussie BBQ, the bus driver, Peter, said the Shanglish cheese had been a hit at his daughter’s 21st birthday party and Sharon, our guide, suggested we try pomegranate molasses as a substitute for balsamic vinegar, and as a marinade.

Our tour guide lightly lamented the entry of Lebanese food into the Australian mainstream, mentioning the commercial packaging of the Middle Eastern spice, sumac, for supermarket shelves and the addition of traditional pickled turnip coloured with beetroot juice, to the menu of a top Australian restaurant.

Gourmet Safaris’ bus tours tend to cross Sydney, while their walking tours focus on a single suburb. You can choose to visit Haberfield (Italian), Marrickville (Greek), Auburn (Turkish), Punchbowl (Lebanese), Cabramatta (Vietnamese), Eastwood (Korean) or Petersham (Portugese). The safaris on wheels add to these cuisines with a touch of France.

Lebanese food is now decidedly part of Australian food culture.  As our guide said : “I used to take labna sandwiches to school. Then it was embarrassing. Now it’s cool”.

When you start using pomegranate molasses in your salad dressing, you’ll know you are “cool” too.