Argentina’s Iguazú National Park and Brazil’s Iguaçu National Park adjoin each other and are both World Heritage listed. They share an awesome group of waterfalls known as the Iguazú Falls using Argentina’s Spanish, or the Iguaçu Falls, with Brazil’s Portuguese. Depending on the rainfall there are up to 300 cascades across a three kilometre line of basalt, with individual cascades up to 82 meters in height.

The best experience is to visit the falls from both sides, making sure you have the relevant passport and/or visa when you cross the border by taxi, bus or car. I visited the falls first from the Argentinian side and then from the Brazilian side and was very pleased I did it this way.

Walking from the Visitor’s Centre on the Argentinian side, I had a sense of discovery, as I gradually came across the roar, and then the sight, of the waterfalls. At first one cascade after another would present itself. Then a set of cascades would come into view with others in close succession. There were even more beyond them … and beyond and beyond. 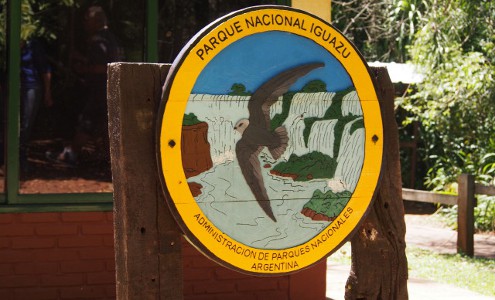 On the other hand, on the Brazilian side, the bus drops you off at a panoramic viewing point for the Falls. Compared to Argentina, I felt no sense of discovery – though still the same sense of awe. Strong steel walkways allow you to strut across the thundering flows of water so close to plunging cataracts of water, that you are also in awe at the engineering expertise that put them there. 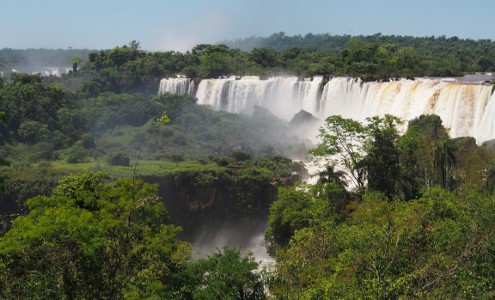 In fact, in both Argentina and Brazil, I was impressed by the numerous man-made perspectives that I could have of this natural wonder. I saw the falls from a helicopter, a boat, viewing platforms, an elevator, from paths above and below the falls, and from several of the super-strong walkways. Had I stayed at the Sheraton Hotel in Argentina or the Hotel das Caratas in Brazil, I could also have seen the falls from my bed or dining table!

The power of the falls generates heavy mist and spray which keeps the ecosystem of the surrounding sub-tropical rainforest teeming with 2000 plant species, 400 bird species, about 8 mammals and lots of invertebrates.

I saw wildlife including brown capuchin monkeys, reptiles like caimans, lizards and tortoises, yellow butterflies hanging out together in flocks on the ground, many other butterfly species, a few toucans and flashes of colour from the red-rumped cacique birds (a blackbird) diving into their aerially-suspended palm-leaf nests. Most of the wildlife keeps its distance, but not the pesky rabies-carrying coatis, members of the racoon family with strong claws and jaws. Be warned – don’t carry food or eat outside. 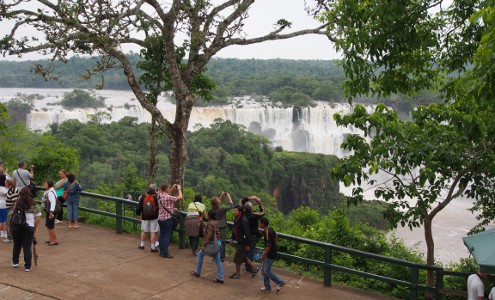 The nearby bird park (Parque das Aves) gave a comprehensive look at South American bird species. There were tame toucans, macaws screaming at each other, numerous scarlet ibis with their orange scarlet plumage and elegant flamingos on pink spindly legs, wrapping their heads into their feathers to sleep. The bird park is not simply a bird park. It’s a re-established jungle, a haven for birds rescued from illegal trafficking or injury, a natural bromeliad garden, a reptilian repository, a reserve for butterflies which co-habitat with hummingbirds, and a private enterprise with social and ecological causes.

As if the natural beauty of the birds is not enough, nearby souvenir shops used local colorful gemstones to re-create them! Were they tacky?! Yes, in some cases, but others were a celebration of color and nature, and well-executed. 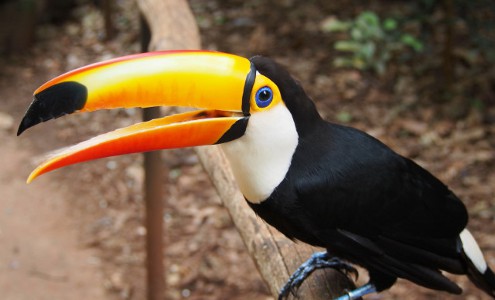 In Argentina, the highlight of Iguazu Falls was being able to walk not just along an Upper and Lower Circuit at the top and bottom of the falls, but also being able to walk for one kilometre across the Upper Iguazu River to a viewing platform for the Devil’sThroat. From the air, the Devil’s Throat appears to have the anatomy of a mouth, and the pounding flow over the u-shaped falls does indeed seem to be sucked down by a malevolent force. The drop is 82 metres, the width 150 metres and the length is 700 metres. It is indeed a Deep Throat. 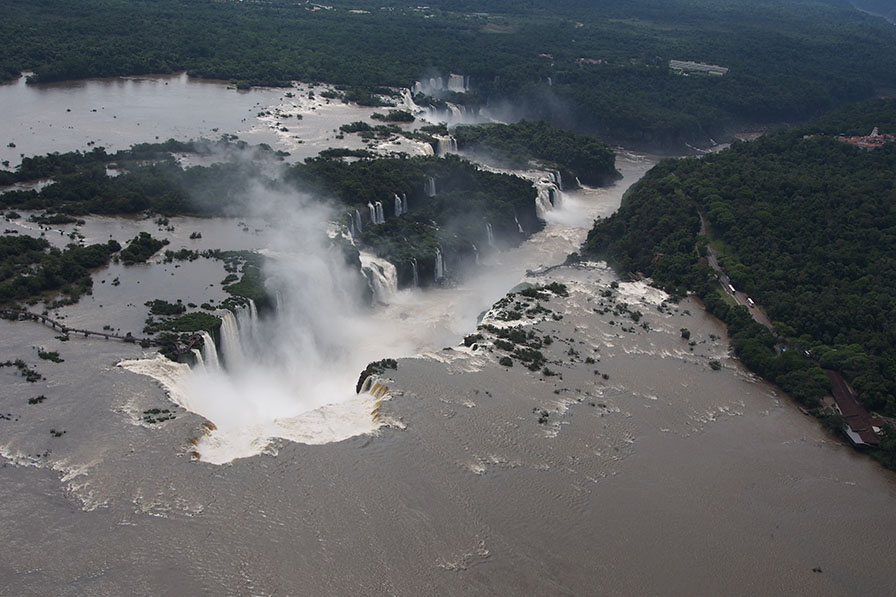 In Brazil, the highlight of Iguazu Falls was the panoramic perspective from both the walkways and from a helicopter flight. The flight leaves from outside the park and despite being only about ten minutes long, it gave not only a condor’s eye view of the falls but also of the various walks I’d done on both the Brazilian side and Argentinian side. It was the icing on the cake.

Although Argentina has eighty per cent of the cascades on its side of the border, the panorama from Brazil gives the impression that it has more of them. But that’s that’s because you’re also looking over to Argentina.

Both countries share this natural wonder, a common World Heritage listing, a positive attitude to maintaining the Park – and large tourist numbers.

Make sure you are part of the tourist count in both Argentina and Brazil, because if not, you’ve missed out on more than one of many spectacular perspectives of the natural wonder of the Iguazú Falls. Or the Iguaçu Falls, depending on which side you’re on!