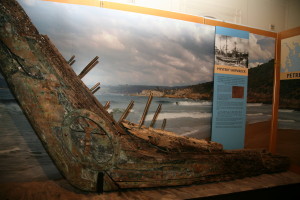 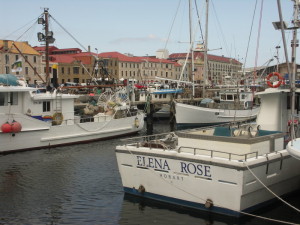 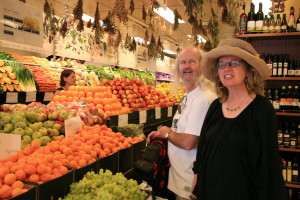 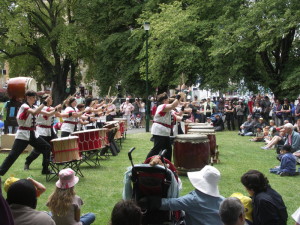 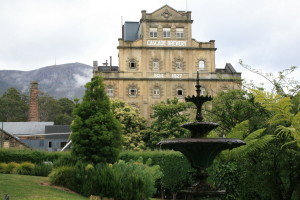 My first stop on arrival at any airport, is the information centre, no matter how many times I’ve been before.

So by the time I’d flicked through brochures including The Farm Gate Guide, Tasmania’s Wine Routes, and the flyers for Cadbury’s Factory and Cascade Brewery, I couldn’t get out of Hobart airport quickly enough.

With my taste buds activated, I headed first to The Taste Festival, Hobart’s annual Waterfront Celebration.

The Festival overlaps the general celebration around Sullivan’s Cove to welcome the New Year in, and most importantly, the arrival of the yachts from the Sydney Hobart Yacht Race, which left Sydney Harbour on Boxing Day.

I got to The Taste Festival from the airport, as fast as a seagull sensing fish-ends and mussel-bits, as they fall off taster’s plates.

In my case, it’s a tiny little crab released from one of my Thai Mussel shells that could attract one of these pesky little birds.

It’s what to choose from the 63 food and wine stalls that was really the issue. But because it spans seven days there were many chances to experience the island produce of beef, seafood, game, cheese, yoghurt, chocolates, ice cream and more. And plenty of local brews, wines, ciders and juices.

Alongside are lively waterfront scenes with the yachties arriving and tourists gawking.

And always, there’s Salamanca Place to one side of Sullivan’s Cove, a beautiful street of former sandstone warehouses, now catering to visitors with tastes historic, gourmet, artistic or nautical.

Salamanca Place is most alive on Saturdays when the Salamanca Market is held. You find colour, curiosities, music, gourmet tastes and second-hand books. As well as artisan-crafted jewellery, lotions, and other delights.

If it’s not the season for The Taste Festival, there is still plenty of food on offer. It’s not just at Salamanca Place and the seafood-purveying waterfront restaurants. You can cruise from here to a restaurant at Peppermint Bay or take a luncheon cruise to the Cadbury factory. And, in the wider Hobart region, there are many more choices.

One day, for example, I went to lunch at Moorilla Estate. It also produces wine and beer and from 2011 will be the site of Australia’s largest private art collection, the Museum of Old & New Art (MONA).

My beer tasting at Cascade Brewery was topped up with lunch in their cafe which included ice-cream made with Stout! A coffee-chocolate flavour indeed! On another day, I decided to prepare my own meal from the Tasmanian produce at the very popular Hill Street Grocery. It’s a shop that sits on an unassuming street corner in West Hobart, just like any self-respecting corner store of the 1800s. But people come from all over Hobart and from yachts on the Derwent River to shop here.

In fact, so often in Tasmania, I’m struck by the feeling of being back in the second last century. It’s the corner stores, the number of artisans, the historic boats in the water, and the many original public buildings and private homes that still look much the same.

The museums re-create history too. At the Tasmanian Maritime Museum, the displays, relics, photographs and models show the rich maritime history of this island off an island-continent, from both Aboriginal and European perspectives. Its exhibits tell part of the story of the origins of Tasmania as a convict settlement, deliberately isolated by treacherous waters. The story is continued in the Tasmanian Museum and Art Gallery, though a visit to Port Arthur, an hour and a half away, really brings the isolation and penal conditions alive.

But Tasmania has many other stories too.

When I was at the Tasmanian Maritime museum, there was a delightful, but unrelated exhibition in the upstairs gallery. It was of the works of two Tasmanian artists, Chantale Delrue and Lorraine Biggs. However, it paid homage to Tasmania’s natural heritage rather than its maritime one.

In Hobart, the dominant natural feature is Mount Wellington, and in Tasmania, the natural landscape and wilderness attracts artists, travellers, adventurers and conservationists alike.

So there are many Tasmanian stories. You can create your own by selecting from options which include the wilderness, the nautical, the artistic, the gourmet and the historic.

One way or another, I recommend that you write Hobart and Tasmania into your own travel diary.