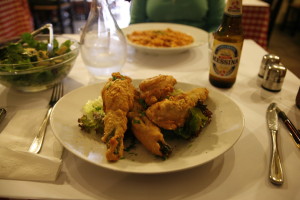 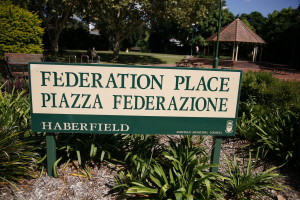 I headed to Haberfield, Sydney for an Italian food experience. But this suburb, 6 km west of Sydney’s CBD, celebrates three different cultures at Federation Place (Piazza Federazione) on Ramsay Street. It sports three flags, one Italian, one Australian and one Aboriginal.

On the other hand, there were no signs of America. The McDonalds chain was refused entry in 2009, because of 100 letters and a 7000-signature petition of protest. The restaurants, shops, cafes and food stores are all markedly Italian.

Unlike neighbouring Leichhardt, Haberfield hasn’t yet hit the limelight in the foodie scene of suburban Sydney. The neon signs haven’t arrived, the pavements haven’t been widened for the coffee patrons, and the heritage buildings have not yet been returned to their original colours and styles. It would be easy to drive through without noticing anything special.

Luckily, I was in the know as I was invited to join a Sydney foodie friend on her monthly shopping expedition from the North Shore to fill her pantry. Her trip to the inner West is for the variety of product, the low prices and the village-style Italian feel. In many ways it is more Italian than Australian, given that 28% of the local population identifies its ancestry as Italian and only 20% as Australian. Alas, only a handful of Aboriginal Australians still live in Haberfield.

The friendly shop-keepers, often speaking to customers in Italian, would rapidly break into English conversation and smiles in response to a question or comment.

A relatively rare English sign at Zanetti 5 Star Delicatessen, promoted, not just traditional pastrami made from port, but also gamier kangaroo or lamb pastrami. Alas, I discovered that the advertised emu pastrami had been discontinued!

At Paesanella Latticini deli, we discovered locally made fresh cheeses that the proprietors manufacture in nearby Marrickville for wholesale and retail distribution around Sydney, including home delivery. Their fresh cheese range included buffalo and cow mozzarella (regular and cherry-sized), fresh and baked ricotta Caciotta with Ricotta and Chilli, and Rollata (prosciutto or salmon).

We were given Holy Goat cheese to try on Italian crisp breads. Not one of theirs, it was imported from the State of Victoria. The manufacturing and maturation process had resulted in cloud-like coating, appropriate as the point of arrival to a heavenly, creamy centre. Yes, holier than most cheeses and worth the reverence.

Our shopping expedition one Friday was punctuated with some more immediate food fare at the Pasticceria Papa, Papa, famous for its Ricotta Cheesecake and offering other sweet treats like cannoli, biscotti, profiteroles and panzerotti. Savoury fare to eat in or take away includes the inevitable pizza slices, but also baked arancini, calzone, foccacias, lasagne and more.

While pizzerias are common, Italian fare is not limited to wood-fired pizza sold by the slice or the platter.

At Napoli in Bocca, I savoured lightly fried zucchinis complete with their zucchini flowers, which were stuffed with a light mix of mozzarella and anchovies. Just the right amount of anchovy, not too salty, and lightly combined with the cheese, appropriate to the delicate host flower. My friend chose a substantial and flavoursome risotto and we had a choice of Italian wines and beers. You could call it a themed restaurant, given the faux-rustic decor of red-check table cloths, high-backed dark wooden chairs and, on the sidelines, the hanging copper pots and pans, heavy pottery vessels, and copied murals and low relief carved panels. And numerous renditions of Pulcinella, a puppet associated with Naples.

I knew I must be in Foodie Paradise when my friend struck up conversation with a Sydney couple at the nearby table, about other far-flung restaurants in Mollymook, NSW; London, England and Melbourne, Victoria. And yet we appeared to be sitting in a non-descript Sydney street.

Restaurateurs and tour conductors can also speak with authority about Haberfield’s Italian produce. Gourmet Safaris runs one of its foodies tours there, testimonials from significant chefs are shown on websites for the locally made cheese, and individual blogs tell other taste tales.

And once you are replete, you could visit the surrounding streets to view homes dating back to Australia’s Federation. This first garden suburb of Sydney was designed to be slum-less, lane-less and pub-less. You can view a variety of architectural styles including Victorian Italianate and Victorian Regency, through the Federation and Arts and Crafts styles to Californian and Sydney bungalows.

Or you could play a little bocce or chess in Piazza Federazioni.

Don’t wait till the neon lights go up on Haberfield. Go now while it’s charming and cheap, Italian and friendly, and while vestiges of last year’s Christmas decorations remain dingily in the background, waiting to be lit up again next year.

But bow to your taste buds first, before taking that walk around the streets or bending your knees on the local bocce court. Then of course, return for another coffee, biscotti, gelati, treccini, tiramisu, tartufo or sfogliatella.