A November Day of Gaucho Tradition in Bariloche, Argentina 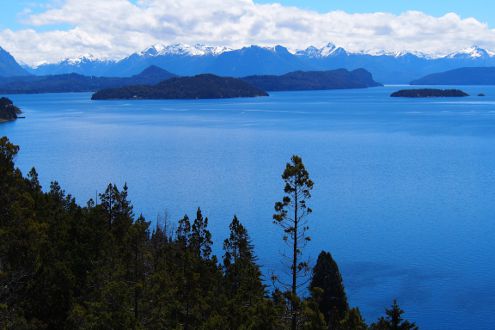 The town’s backdrop was a series of beautiful deep blue lakes and snow-capped mountains. I could have been in Switzerland. Until a lone cowboy galloped down the main street, past the chocolate shops, Swiss chalet-style buildings, European beer houses and a fondue restaurant.

The horseman held both plaited-leather reins in one hand and a leather whip in the other. He was casually dressed, a cowboy wearing a beret-style hat and a narrow cravat. His stocky chestnut horse with white forelocks and tail was well-brushed and adorned with a plaited leather bridle and a sheepskin rug, also chestnut in colour. 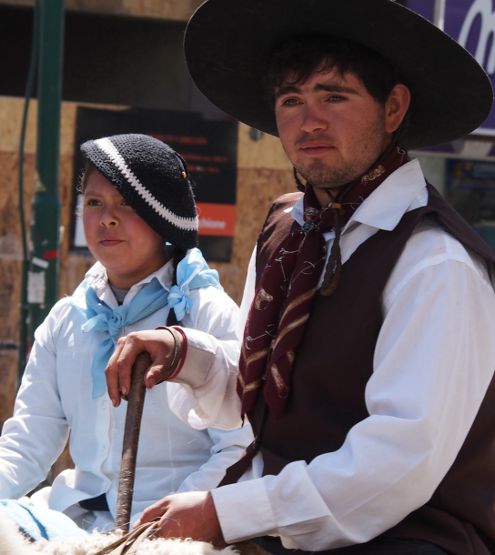 In fact, I was in the town of Bariloche – officially San Carlos de Bariloche – in the foothills of the Andes at the western side of Argentina’s Patagonia. I soon discovered that this town of 110,000 permanent residents, and many more visitors during the snow season, is a place of diverse heritage. Its past began with the indigenous Indians, was disrupted by the Spanish invasions in the sixteenth century, was a place on the horizon during the development of the gaucho (cowboy) culture and supported European immigration from Switzerland, Italy and Germany in the 1930s and 1940s. 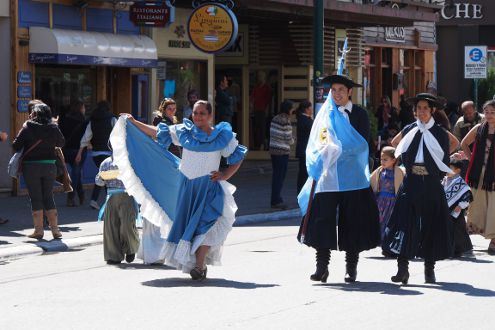 The horseman and his mount signalled the start of a colourful parade of men, women and children of all ages, largely riding horses, ponies and carts, lasting almost two hours. It was Argentina’s El Día de la Tradición, (Day of Tradition), a day which celebrates the gaucho’s pride in their traditions and the country’s overall pride in them. It’s held across Argentina on the weekend closest to the birthdate, November 10, of José Hernández. His epic poem, Martín Fierro, published in 1872, celebrated the Argentinian gaucho, via the central character of the same name, who strums his guitar as he sings the words of the poem.

The poem was written around the time that the roving life of the horse-riding, livestock-herding gauchos, with their mixed Spanish and Native Indian heritage, was being challenged by more recent migrants. Ranches were being fenced off, and gauchos were being characterised as criminals and conscripted into army service. The poetic epic became a catalyst for gaucho pride in a then-antagonistic country. 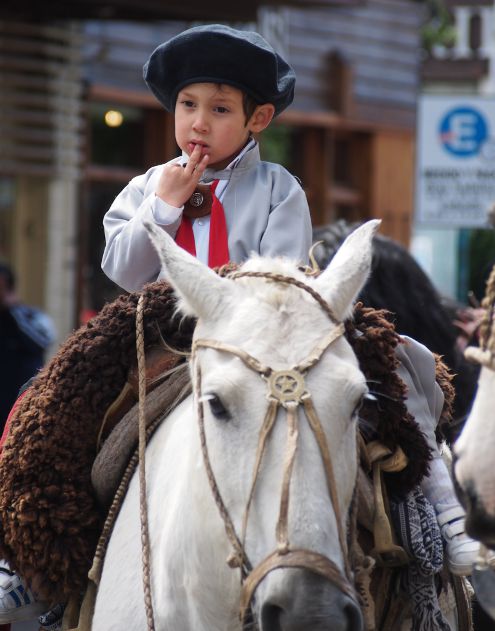 First in the parade came the families. A ruddy-faced young man casually rode with his little daughter, equally ruddy-faced, sitting in front of him. Another girl, slightly older, rode on a sheep skin cover behind her young brother, clutching him and sending a dimpled smile to the crowd. Her white dress flowed over the horse’s back and her black plaited hair, decorated with white flowers, swung loosely. A young boy, aged about five, rode his pony down the street. Teenage boys in the saddle seemed keen for more action, their bodies slightly stiffened, as though ready for a trot.

Young men looked buoyant and rode or walked behind banners showing membership of a local gaucho group. Others showed their loyalty to Gauchito Gil, a gaucho ‘saint’ honoured in Argentina by red roadside shrines, red neck scarves or red embroidery. There were many accents of red in the gaucho dress code that day. A few young men wore traditional black culottes and wool felt hats, rather than the beret-style hats, known as boinas.

In some of the older men’s faces I detected a look of stoic melancholy, particularly those carrying Argentinian flags or walking down the street behind banners bearing the Argentinian national colours of blue and white. In at least one group, it indicated the men’s involvement in The Falklands War against the United Kingdom in the 1980s.

Women and girls of many ages walked or rode, frequently in blue and white. The fullness of their long, flowing skirts with layers of frills, often allowed them to pick up the excess fabric by the hem, fanning it out and holding it aloft as they walked. They looked dance-ready. Yet the dances were kept for after the parade.

The tiniest child looked relaxed on the horses and ponies. Everyone, including the horses, was beautifully groomed. Plaited leather adorned the horses’ bodies and neck and they sported a variety of saddles, stirrups and adornments.

The criollo horses are part of the gaucho way of life. Horses have been around since the Spanish invasion in the 1500s. In the wild, they multiplied and were naturally-selected to a stocky breed perfectly suited to the pampas environment.

Many onlookers were also in traditional clothing, the men wearing loose trousers (bombachas), varied hats and boots – and always carrying a knife. Women and children wore skirts and ponchos, plaits and ribbons. 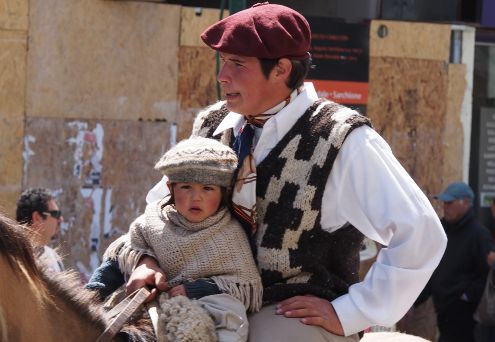 This parade was part of my introduction to gaucho life. It had started in Buenos Aires, two hours flight to the north-east of Bariloche where I’d been introduced to open air barbeques (asados) and the ubiquitous drink of gauchos and Argentinians, the bitter yerba tea which is shared and sipped through a perforated metal straw from a mate (gourd). It contains caffeine but a number of other elements which I was told were essential supplements for meat-eating gauchos and Argentinians. Electric kettles across Argentina even have a mate temperature setting.

My gaucho education continued later as I travelled through Patagonia, right through to the Eastern coast at Bahia Bustamante where I met gauchos working on a sheep station, or relaxing with their yerba mate tea. 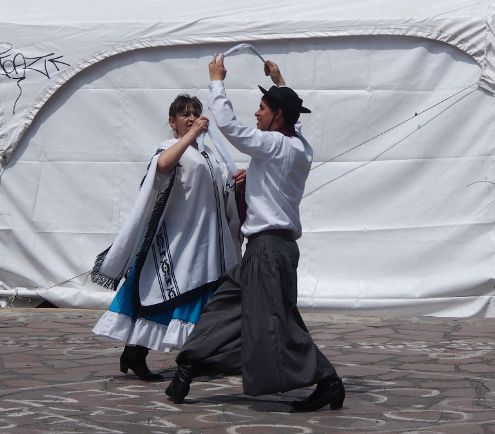 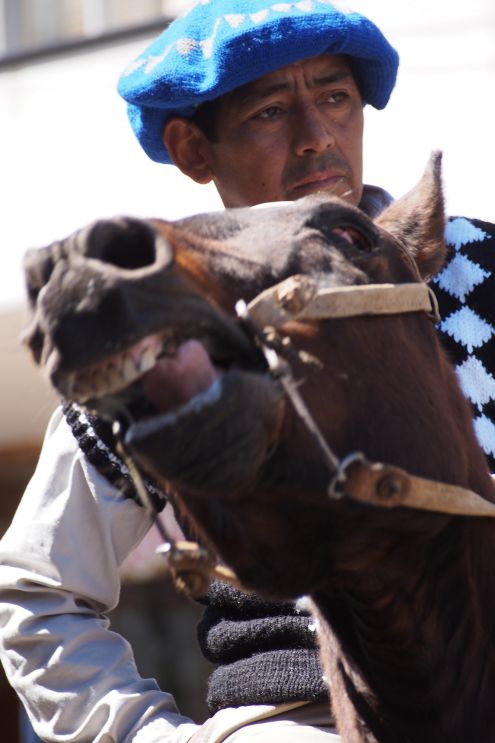 A gaucho and his criollo horse © Marjie Courtis

As soon as the parade was over, workers moved in to shovel away the horse droppings. The paraders dispersed in many directions. I saw a lone horseman ride out of town beside the blue lake of Nahuel Huapi. I saw couples dancing the traditional Zamba in the Civic Centre Plaza, and others buying knives – variously mounted on goat trotters and bone – from a pop-up stall. I saw a poster for a gaucho musical event, people drinking their tea and others, too old or too busy to be in the parade, parading in the plaza instead.

As riders rode out of town, banners were packed up until next year and tired children slept, I went to an art exhibition at the city plaza. The art of Pablo Bernasconi, a witty Argentinian illustrator, was on display. Many of his works focus on literary giants and their creations. There was Cervantes of Don Quixote fame, Melville, Mark Twain, Hemingway and Goethe.

And then, on one of the works, there was an illustration which resonated. It was a man – with a typical gaucho hat and a red cravat ­ sitting on a horse, his guitar looming large on the paper. It was a fitting tribute to the poet Hernández, whose birthday is after all, the inspiration for this colourful national day of tradition. Yes, who could it be in the illustration, but Hernández’ gaucho hero, Martín Fierro. 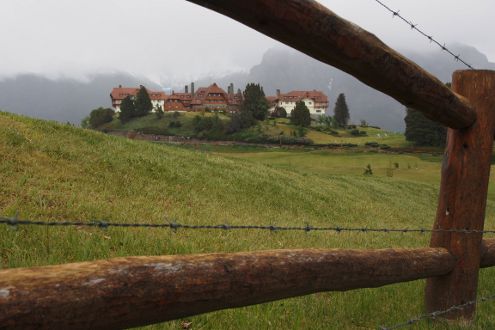 El Día de la Tradición, is celebrated in many places in Argentina. In most places, including Bariloche, celebrations begin on Hernandez’ birthday, Thursday November 10 with the parade taking place on the closest weekend. 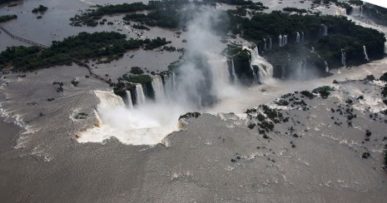