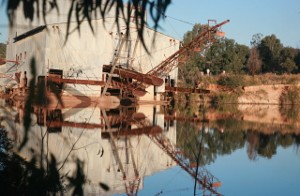 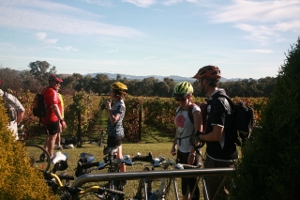 Cycling and food pursuits complement each other wonderfully in North East Victoria.

My cycling buddies and I based ourselves in little cabins at the Everton Gardens Caravan Park at Everton in North East Victoria.

Everton was a great hub for accessing cycling trails that are well documented online for the Murray to Mountains rail trail and the Pedal to Produce rides in the area.

We made three cycling trips along three separate spokes. The first was south-east to the Milawa Gourmet Region focussed around Brown Brothers Winery.This ride was part of the Pedal to Produce ride and largely along pleasant back roads.

The second spoke was south-east from Everton to Myrtleford, primarily along the Murray to Mountains trail, partly along a back road.

Spoke three was a ride from Everton to Beechworth along the rail trail where the reward for the 16 km eucalyptus-lined uphill climb is historic Beechworth and its numerous cafes.

The rail trail has an asphalt surface in most places. but, there is also a mountain-bike path a little apart from the main trail. It meanders in and out of the trees and up and down little hillocks, while the main path, of tamer spirit, follows a reasonably constant gradient.

With the climb over, it was possible to dawdle on the return trip from Beechworth. Riding through farmland, I stopped to watch a cow in concentration, as she licked the afterbirth from her newly-born calf.

A little further along the trail, Pennyweight Winery had a convenient entrance for bikes right on the rail trail. While it is the back entrance, we were actually treated with great respect – the proprietors considered cyclists to be eco-tourists, so more likely to respond to the organic, bio-dynamic nature of the vineyard.

The remainder of the ride from Beechworth to Everton was through some good Aussie bush and some rocky cuttings that were obviously dug for the train when it ran through the area.

It’s not just the rail trail designers that support the two-wheeled tourists. No one in this region look askance at lycra-clad wine tasters, picnickers or restaurant patrons.

Everton itself lies just outside the Milawa Gourmet region. Yet the Everton pub really does the local wine industry proud, with a wide regional selection, priced extremely fairly.

For hungry cyclists, the pub food suffices, with the whole trout from Bright, coated in almonds, giving a taste of what could be done if the pub extended its focus to include more locally sourced food.

The milk bar, the third business in town, makes a mean coffee milkshake, the only one I have ever had that makes it with real espresso coffee.

On this trip, my food tasting highlights were the Milawa Cheese Factory with its wonderful array of goat, sheep and cow cheeses My best winery discovery was Pennyweight Wines and my café highlights were Bouchon at Botanicals in Beechworth and Café Fez in Myrtleford.

My cycling highlight was the rollicking downhill ride from Beechworth to Everton, while my favourite road-based detour was north to El Dorado Dredge, a former gold dredge.

And yet, over three days we indulged in a tiny percentage of the cycling and culinary opportunities of the area. I’m already planning my next adventure to North East Valleys with the aid of some local market intelligence.