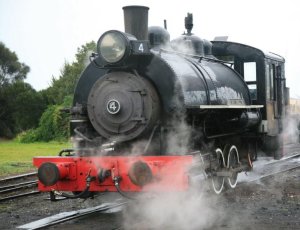 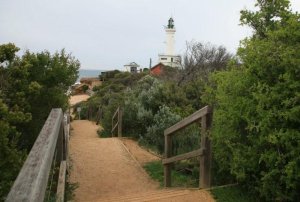 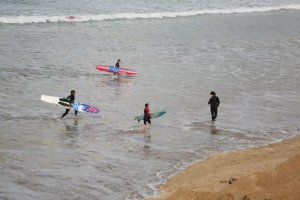 Barwon Heads is a good place to begin your Tour de Bellarine Peninsula. It is the town from which Australia’s first Tour de France winner hails.

Almost as soon as Cadel Evans had led the pack through the Arc de Triomphe in Paris in July 2011, his townsfolk were looking for ways to honour him, such as re-naming the Barwon Heads bridge or creating a new Barwon Heads cycling trail.

The Bellarine Peninsula has a number of sweet spots, like Barwon Heads, and it definitely deserves a tour, whether by cycle or by car. There are bay, ocean and surf beaches, a water park, sailing, diving, golfing, fishing and the opportunity to swim with dolphins. There are gourmet delights. There is history, style and colour. And there are sea breezes and the feeling of seclusion that only a largely-seabound peninsula can give you.

The Bellarine Peninsula is one of two peninsulas that almost enclose Victoria’s Port Phillip Bay, except for a narrow channel known as The Rip or The Heads.

From Point Lonsdale, if you’re armed with the Shipping News from the chalkboard in front of the Queenscliff Information Centre, or from Port of Melbourne , you can watch cruise ships, container ships and the occasional oil rig, making their way through the treacherous entrance of The Rip.

You will probably spot the orange pilot boat that is despatched from Queenscliff along with an experienced pilot, each time a ship passes through. The lighthouses at Point Lonsdale, Queenscliff and on the Mornington Peninsula, on the opposite side of Port Phillip Bay, are not enough to ensure safe passage.

At Point Lonsdale, a quiet, hotel-free part of the peninsula, you can swim and surf in bay and ocean beaches, visit the lighthouse, see where Australia’s first international telegraph was sent at the Marconi Memorial, and see a cave once inhabited by William Buckley, an escaped convict who lived for decades with the Wauthorong aborigines. He eventually re-kindled his relationship with white civilisation at John Batman’s camp fire at Indented Head.

There’s plenty of variety on the Bellarine Peninsula.

From well-positioned vineyards like Scotchman’s Hill, with a tasting room located at the historic homestead of Spray Farm, there are sea views to several sides.

From Portarlington jetty, there’s a fishing-village-feel, with local mussels a specialty.

From Queenscliff you can catch a ferry to Sorrento on the other side of Port Phillip Bay if you want. Queenscliff, the most regal of the Bellarine towns, still has the classic Victorian hotels that received Melbourne’s paddle-steamer guests a century ago. The churches that catered for their sober Sundays with scriptures, are still there too, though at least one is now a restaurant and another a bookshop.

With a maritime museum, a naval fort that helped guard The Heads during the two World Wars, and a restored steam train, Queenscliff provides further historical context.

There are other towns and villages too. There’s Drysdale, where goats’ cheese is produced, St Leonards where oysters are farmed, Wallington, where wine and olive oil is produced and the quirky Oakdene restaurant operates, and more winery destinations at Clifton Springs, Curlewis and Marcus Hill.

But you can stay well away from the towns and villages if you want. There’s a Bellarine Rail Trail for cyclists, though its surface and gradual gradient make it most suited to social cycling. It’s not really for road racing or practising for the Tour de France, so I don’t think you’ll see Cadel Evans on it.

The Bellarine Taste Trail, provides itineraries that allow you to savour some of the Peninsula’s produce, restaurants and wine. I also discovered a foodie’s guide when I recently dined at Oakdene Restaurant. It’s a book called Produce to Platter – Geelong and Surrounding Regions including, but not limited to, The Bellarine Peninsula.

If your interests are ecological, there is Swan Bay’s Marine Discovery Centre and the environmental trail between Queenscliff and Point Lonsdale. Swan Bay is a shallow part of the Port Phillip Heads Marine National Park and an important conservation spot for bird life and marine creatures. The Marine Park offers great diving opportunities, while protecting unique species like the Weedy Seadragon, the marine faunal emblem of Victoria.

And so, having completed a Tour de Bellarine Peninsula, it’s back to Barwon Heads. The pedestrian bridge that links Barwon Heads to its estuary-separated twin, the town of Ocean Grove, is already iconic, not just because it is old, historic, charming and picturesque, but because the whole scene featured so strongly in Seachange, an enduringly popular Australian television series, even though the last of its 39 episodes was screened in 2001.

By the time you visit Barwon Heads, perhaps it will have become doubly iconic and bear the name of Cadel Evans. In any case, take in the sea air and tranquillity, as Cadel Evans must have done so many times.