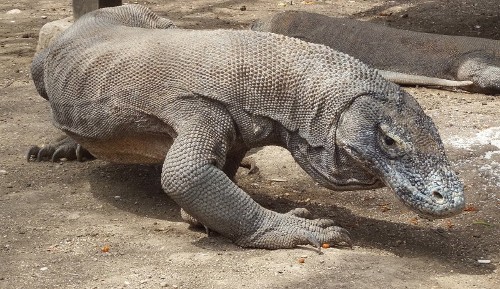 The gentle, endearing geckos of Bali are hardly an introduction to their relatives, the carnivorous, cannibalistic reptiles of Komodo National Park – the Komodo Dragons. 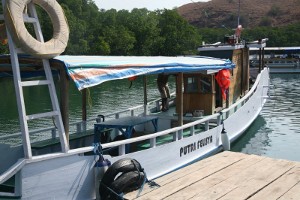 The Boat From Flores

I took the cue from the staff at the Udayana Eco Lodge in Bali, who arranged my travel. I took a flight to the island of Flores to stay in the Bajo Komodo Eco Lodge, with great expectations about a long boat trip the following day to Komodo National Park.

Before the crack of dawn the next morning I awoke to what I recall was a cacophony of sound – a knock on the door, a buzzing mosquito, a rooster crowing and my mobile phone jangling. In no time at all and my boat was chugging off towards Komodo National Park.

Komodo National Park comprises a number of islands, and is on the World Heritage List. Two of its largest islands, Komodo and Rinca, are the main habitat of the world’s largest lizard, the Komodo Dragon (varanus komodoensis). Komodo National Park is also listed for its biodiversity and stunning marine life, with 100 species of fish, 385 species of reef building corals, seventy species of sponges, ten dolphin and six whale species, not to mention sea turtles, dugongs, sharks and manta rays. 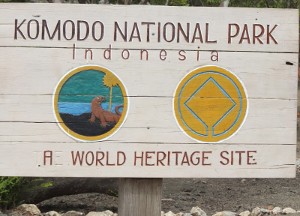 Entrance to the Park

By the time the engine was cut and we glided onto the jetty at Komodo Island, it was late morning and I could see deer on the beach. At this hour of the day, the Dragons were at their least active. They lumbered along or lazed in the sun, but were always ready to spring into action I was told. Four well camouflaged males were not so far from deer drinking at a waterhole. Their speed and power is awesome. Like all reptilian monitors, the Komodo Dragons can use their throats as bellows to pump air into their lungs while running at 40 km per hourÂ…and run for a kilometre!

Their long forked tongues help them to smell out more distant targets or carrion, but if they stalk their own kill, they can whip their victim with their long tail, claw them and bite them to infect them with the virulent bacteria in their saliva.

The rangers – and visitors like me – were protected only by the frail comfort of a long forked stick which the rangers will use to prod either the dragon’s nostrils or the back of its head. Their knowledge of the dragons is important too. They know to cordon off any area where a female dragon is guarding her nest. Even although she abandons the nest when the weather is warm enough for the eggs to hatch without her, she is likely to be around when they do break out, ready to eat the hatchling dragons! They have to scamper up trees to hide in the canopy until they’re big enough to fend for themselves. 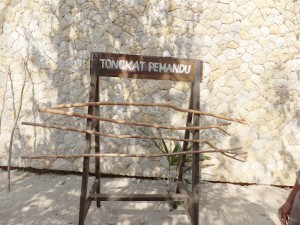 The Guide’s Only Weapon To Fend Off Dragons

It’s with a certain amount of glee that the ranger will show you the “display stand” of the skulls of water buffalo, deer, wild boar and, on Rinca, the crab-eating monkeys. I asked Rinus, the ranger, why there were no monkey skeletons. “Oh, they crunch them up completely!” Sure enough, the dried droppings of the Komodo dragon are white, highly fortified with the calcium of bones.

A day trip is not the ideal way to visit Komodo National Park but it was an opportunity and I seized it. I saw the Komodo dragons, the secluded anchorages at Komodo and Rinca islands, and I enjoyed the humour and character of my boat crew and guides. And on the return trip to Flores, I experienced a stunning snorkelling trip among the colourful corals and tropical fish of a small Indonesian section of the world’s Coral Triangle. Its marine riches were a short flipper-footed flick away from the edge of a white sandy beach – well clear of the islands inhabited by the dragons. 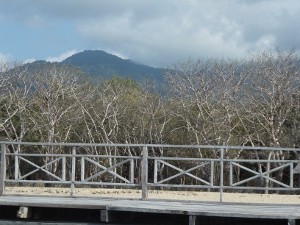 The islands of Flores, Komodo and Rinca, were a fascinating contrast to the island of Bali. Instead of the music of the ubiquitous gamelan, I would hear the Muslim call to prayer. Instead of the high-pitched “uh-oh” of the gecko, I went out of my way to hear the deep growl of the Komodo dragon. Instead of finding a money changer on every corner, I had to search for a relatively rare and more highly priced money changer.

A flying visit to Flores from Bali not be taken lightly though. It’s relatively expensive to fly there, and because it’s not geared to tourists, you can find that one or two or you are paying for a whole boat crew, or an entire Caci dance. That happened to me! But it was a conscious decision to go there and a satisfying one.

I would recommend staying over at Komodo or Rinca Island to “meet” the komodo dragons at sunrise, when they’re at their most active … there are bungalows available … elevated of course! And to spread the costs, consider joining a tour at http://www.floreskomodo.com. There are a number on offer.