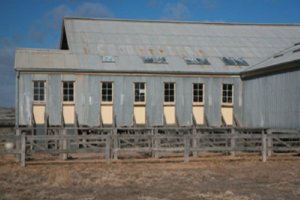 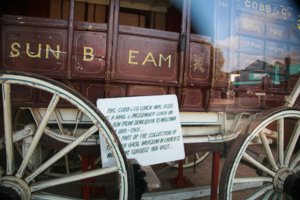 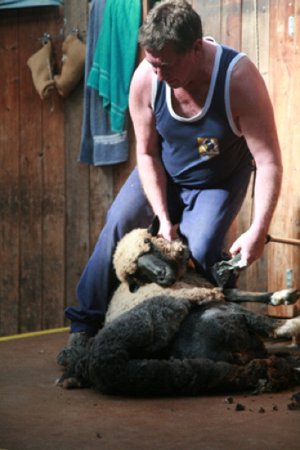 Australia’s economy rode the sheep’s back well into the twentieth century.

And for those of us raised on Click go the Shears, Waltzing Matilda and Clancy of the Overflow, there is something romantic about the Australian wool industry.

As part of a self-drive tour of Australia’s outback, I visited three disused shearing sheds in three days, and old river landings and ports on the Murrumbidgee, Darling and Murray Rivers. I travelled along “The Long Paddock” once frequented by drovers, sheep and Cobb and Co. coaches, and admired restored paddle steamers and a Cobb and Co coach.

I travelled within a triangular area roughly bordered by Mungo National Park and Hay in NSW, and the Murray River bordering NSW and Victoria. It was a good way to get in touch with part of my Australian heritage.

While Mungo National Park is most famous for its ancient natural and aboriginal heritage, it also has a more recent pastoral and agricultural history. The robust shearing shed that was once part of Gol Gol station has survived very well since its construction by Chinese labourers in 1869.

They used locally sourced White Cyprus Pine and a drop log construction technique, dropping horizontal logs one by one, between vertical posts carved out to accept the shape of the log ends.

The shearers’ quarters themselves, appropriately re-vamped, are available for low cost accommodation and there are good interpretative boards around the site and in the adjacent Visitor’s Centre.

Several times each day, Billy, an experienced shearer, shears a sheep in the traditional way, with “blows” to the belly, crutch, hind legs, top knot, neck and shoulders, followed by a “long blow” from the rump to the back of the head. When the wool drops to the floor as a single fleece and the skinny sheep skedaddles away to its pen, Billy the shearer draws admiration from the visitors and wipes his unsurprisingly sweaty brow.

From Hay you can take a journey along the Cobb Highway, along a well-documented former stock route of about 600 kilometres between Wilcannia in NSW and Echuca/Moama on the Murray River, called the Long Paddock.

A “long paddock” is a stock route, typically on public land, where stock animals graze for food, sometimes due to drought. This signposted Long Paddock on the Cobb Highway, named to commemorate the Cobb and Co coach, takes you to many places of note in the wool industry’s history.

The Long Paddock led me to Yanga National Park and Yanga Station, where the smell is distinctly sheep-ish even though there is no longer a sheep in sight.  Perhaps this is unsurprising since Yanga Station was a working pastoral, cropping and irrigation property for over 160 years.

You can visit the 140 year old former homestead and the shearing shed and view at least part of the station’s original 170 km frontage along the Murrumbidgee River. It now has informative and entertaining sign boards showing life in and around the shearing shed, and around the old port area that used to take the wool bales for shipping around Australia’s inland and sea ports.

Decaying shearer’s quarters and other out-buildings tell tales of the simple, rough life of the shearer.

It’s not surprising that there are a few spare shearing sheds around, since Australia’s sheep numbers have dropped from 180 million in the late 1980s to around 71 million sheep currently. Shearer numbers have approximately halved to 4000 in the same period.

While the sheep may have grazed on the Long Paddock, the shorn wool may have been transported by bullock cart, camel and paddle steamer before it reached its market.

The money made from the sheep’s back and the woolgrowers who owned the flocks, may have travelled the dirt roads by a Cobb and Co coach, many of these having been built in the town of Hay in NSW.

Hay now displays one of its restored Cobb and Co coaches in a glassed- in display in Moppett Street.

Paddle Steamers eventually lost out to trains when the railways arrived in the late 19th and early 20th centuries. But before that, Yanga Station could benefit greatly from its river frontage on the Murrumbidgee, and Murray Downs station from its frontage on the Murray River.

Gol Gol station was more distant from the rivers, but acceptably close to an inland port at Pooncarie, 55 kilometres away on the Darling River.

After my visit to this remote part of south-west NSW, I was beginning to feel like I was travelling on the sheep’s back myself. It was an evocative trip along part of the trail of Australia’s wool industry and I was feeling relaxed. I found myself humming:

Click go the shears boys, click, click, click
Wide is his blow and his hands move quick
The ringer looks around and is beaten by a blow
And curses the old snagger with the blue-bellied “joe”